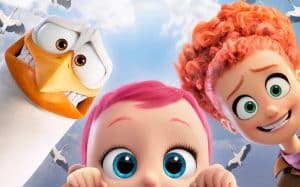 Once the storks were delivering babies, but it was not a good business. Now hand over of all, through a sales company Retail receive orders and deliver parcels containing, ordinary consumer goods. In their headquarters they are organized as a modern company, but the only one gear out of place is never delivered a baby, adult today and not inserted into the production system. Just she mistakenly reactivate the machinery for child delivery and must therefore, together with the member in the group rise, delivering the last baby.
It is no longer just writing Pixar to be able to cross the public, to propose cartoons for children who entertain adults with a different reading level. We test with much taste even Warner Animation Group that with Storks in Mission replica Lego winning idea – The Movie, that combine zany and clever, stuffing a layer cake where each floor you can find a different audience.
Not interested in a really sentimental dimension, away from any idea of ​​emotion or emotional involvement, Storks in Mission is a movie all of intellect, a treatise on power, on its attractiveness (laughing the way they all react the same thoughts to the idea of ​​a promotion) and the effects it has on people. Or rather about storks.
Storks in this film are the most human of men, that is, they have not only feelings and flaws like any anthropomorphic character, but they are just men. With very thin allegory, they rated these animals to trade and converted to the new economy of large retailers, ethics victims of success and business strategies, occur almost immediately as more human than men. By dint of change and evolve have lost their original mission and not know who they are, at least until someone not be able to remember him. Stoller and Sweetland are not directors of incredible finesse, but trudging with having to perform in front of the possibility of creating animation images. Their film then betting everything on writing, thus making very human these birds is the way you mistreat, are each other’s weaknesses on which to try to pry, flaws that show not individually but collectively. As a species.
Storks in Mission remembers well how Disney has flourished for decades thanks to animals who behave like men. What no cartoon might be doing to the men, you may be able to help the animals. Seen through the distorting lens of metaphor the recognizable attitudes appear to us so distant and yet very clear. This company’s board in which every living being is defined as part of a pack (the wolves are no exception) or external to it, in which even the human family that awaits the newborn is in the balance between creating a group or fail to establish the union which should, treats children as adults in respects the simple humor and stimulates the intellect with something more sophisticated.