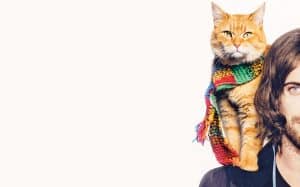 James Bowen is a homeless singer-songwriter, who lives and sleeps on the street, eating what is and yielding to the lure of heroin to escape from despair. His parents separated when he was eleven, James followed his mother in Australia, then returned to London, but has never managed to get un-ban from his father, who has since formed a new family. The meeting that will change the life of Bob is the one with a red cat, found wandering around in her council house in Tottenham. Bob to treat a wound, James finds the strength to get up in the morning, but the cure is mutual: even Bob never leaves him; montandogli follows him on the shoulder as he goes to collect money by playing in Covent Garden or around London by bicycle to sell the Big Issue.
The true story of Bowen and the cat named Bob became a book that sold a million copies in the UK alone, which gave rise to many other publications, for adults and children and that has not only changed, but literally revolutionized story of its protagonist, transforming a nightmare into a fairy tale and now, in a feel-good movie. Up to a certain point, however. One of the interesting aspects of the film, in fact, together and in agreement with the realistic tone and the dryness of the dialogues, is his not making too many discounts on the “inconvenience” of street life, the mortal dangers of drugs and the Calvary of detoxification. No sequence to Trainspotting, the focus of the Spottiswoode film is soft and warm like the fur of a cat, you can not delve too much into the nightmare (the hero never loses patience, is kind of a saint), but the omissions They do not sound like lies but as a registry choice, understandable if not justified.
The other aspect is curled up in the very idea of ​​Walking with Bob and it has to do with the theory that dependence on hard drugs have a psychological reason, which puts at risk some subjects than others, and results from a lack affective deep, by dramatically neglected emotional needs. The film insists, even too schematically, on the role that the father’s abandonment had in James’ life, and there is no doubt that Bob, with his cast and his stubborn presence, represents, in the boy’s life, the first real form of love, mutual and unconditional, with all the positive consequences. A kind of angel to Frank Capra, covered with reddish hair.
The choice of Luke Treadaway as the protagonist, who does not resemble the true Bowen but inspires an equal instinctive tenderness, confirms the intention of the film to act as an instructive and moving story, a story of hope and redemption. No big deal, especially from the point of view of film, but a just invite you to look at people from another perspective, less judgmental and more feline.