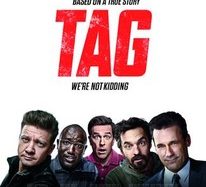 Hoagie, Bob, Jerry, Randy and Sable are five friends obsessed with a game they shared when they were kids. Regardless of their present and their social position, every May the five chase each other with every means to try to “take”. Jerry in thirty years has never been “taken” and friends are willing to do anything to break his record.
In the original sounds like Tag, in Italian you can make it with the most prosaic “yours”, with implicit “the bad luck”, to be passed quickly to the unfortunate, as a virus that you need to get rid of as soon as possible.
Rules are subjective, variable and capricious, but sticking to them resembles an oath of faith. Many boys hide something like this in the virtual closet of their childhood memories, including games and various dolls. A suggestion that on paper was difficult to imagine as an ideal subject for a film subject, but a New York Times article on nine adults who persevere in their game as boys, thirty years later, pushes the writers and the director Jeff Tomsic towards the bizarre decision to make a film (in which adults become 5). Putting first the problem of being able to hold for at least 90 minutes, inventing something that goes beyond the simple nostalgic celebration of the time that was.
The amarcord fee is spent especially in the soundtrack, which draws classic hip hop like Colors, among the curiosities for connoisseurs like the Pharcyde or between hits like “Mmm Mmm Mmm” of the Crash Test Dummies. With the latter destined to become a torment, it is so peculiar, improbable and therefore – inexorably and fiercely – the nineties. It is precisely the decade of grunge and Bill Clinton the invisible protagonist of Prendimi !: the shameful nineties, epoch of Peter Pan so depressed by the rubble of the past and the little encouraging signs of the future to prefer escapism without ifs and buts. And what better form of escape than transplanting childhood games in the middle of bourgeois hypocrisy?