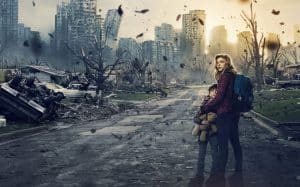 In the province of Ohio young Cassie lived four “waves” of a devastating alien invasion, which reduced what remains of humanity in a frightened community and without a guide. The omen that the fifth wave is the final one is accompanied by the feeling that the aliens are indistinguishable from humans.
In Sils Maria by Olivier Assayas, among many memorable scenes, there is one in which the characters of Juliette Binoche and Kristen Stewart look ridiculous science fiction blockbuster starring the character of Chloe Moretz, starlet on the rise. The fifth wave, unwittingly resembles terribly in the movie in the movie, while replacing an obvious exaggeration of unintentional comedy parody. A key to Sils Maria was represented by the exchange of identity between the actresses and between their characters: phenomenon that paradoxically seems to be reflected here, where is the Moretz to impersonate a heroine Young Adult struggling with a story of impossible love and tormented , similar to that of Stewart Twilight.
The first “important story” upsets the reality and the world of Cassie, leaving it torn by doubts across the road to take, between right and wrong, between what is good and what is bad. But if the rewriting Young Adult horror classic could be awkward or simplistic but conquered his audience, a review of the alien invasion syndrome with inevitable future dystopian it does not work on any level. The love story proceeds by forcing and effort to involve the issue fails sci-fi technologically – absent or puerile special effects – and the narrative – all is known and wearily synthesized for the masses – the Cassie’s hair looks always fresh shampoo, even after days of life in the wild.
The truly dystopian vision of the world to come is that of a future where movies like The fifth wave will become the norm. A universe in which the cinema is only pastime and a way to accept the stereotype simply an approximation of reality, without looking at the likelihood. Where deepening is no longer necessary and the perceptual experience is only a bignami, composed of confused memories of what it was. In a way The fifth wave seems the result of a civilization lost and dominated by the body snatchers, who has accepted his fate with resignation de-evolutionary.