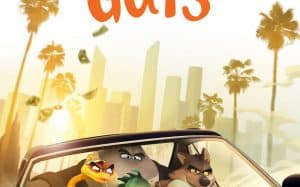 They are cunning, bold, intelligent, they are also bad, but “very good at it”. I am Mr Wolf, the George Clooney of the gang, Mr Snake, the most wicked, Shark, genius of disguise, Piranha, all teeth and swollen muscles, and Miss Tarantula, for friends Webs, hacker of small dimensions and big brains. All they ask is to keep stealing and get away with it, to escape in a racing car and enjoy their faces on the news, sitting comfortably on the sofa in their secret lair. But the arrival of Governor Foxington changes everything. This time, if the Toppo Baddies want to escape capture, they have no choice but to pretend to be too good, to win the Good Samaritan Award and finally steal the coveted Golden Dolphin.

The latest entertainment at Dreamworks is an Ocean’s Eleven with a brat pack of legendary villains, characters used to scare crowds with their simple appearance, led by the most fascinating and historically credited of the villains of fairy tales: the wolf.

The screenplay by Etan Cohen (Madagascar 2, Tropic Thunder) and Hilary Winston, based on a very successful series of graphic novels for children by Aaron Blabey (the same as “Thelma the unicorn”), imagines the furry enemy of the pigs crossing a unexpected existential crisis, in the moment in which he finds himself forced to an unexpected good deed: the tail then begins to wag its tail out of control and something in his proud identity as an antagonist falls apart internally. As a lover of adventure that he is, he wonders in his heart what it would mean to no longer be feared and instead be applauded; in a word: accepted.

Too Bad is certainly not the first film, animated or not, to tell us that appearances often deceive, but it does so with fidelity to the genre of reference, the gangster movie, which makes up for what is lacking in terms of style. of originality of the story. After all, the film winks at the existentialist turn that the great cinecomics have taken, with the recent rewriting of the bad guys as victims of a society greased by prejudices; anti-heroes forced to arm themselves against the ease with which the so-called normal citizens stigmatize them, because they are socially different or real freaks.

Mixing animals and humans, Too Bad serves the genre by confirming, with lightness and sympathy, that the big city is still and always a jungle (asphalt), where human drama is ignored, male friendship is the strongest feeling of all, and there is no room for female figures who do not have the charisma of a charming dark lady.

In his feature film debut, Pierre Perifel brings home a fun and lively result, not particularly layered in narrative terms, but flawless from the point of view of the action and well done in terms of the visual characterization of the characters.