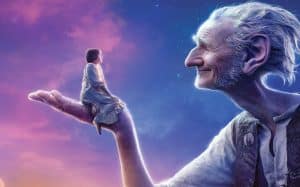 The GGG is a giant, a Big Giant Gentile, very different from the other inhabitants of the Land of Giants as San-Guinario and Inghiotticicciaviva feed on humans, preferably children. And so one night the GGG – that is vegetarian and only eats Cetrionzoli and Sciroppio – kidnaps Sophie, a girl who lives in London and takes her to his cave. Initially frightened by the mysterious giant, Sophie soon realizes that the GGG is actually gentle, friendly and wonderful things can teach. The GGG indeed leads Sophie in the Land of Dreams, where captures the dreams that sends at night to children and explained all about the magic and mystery of dreams.
Steven Spielberg had sooner or later meet with Roald Dahl and do it with this book. First of all by coincidence (not the astral but still significant) which meant that “The BFG” and E. T. – The Extra-Terrestrial they found the way to one of the libraries and the other one of the screens in the same year (1982). Then also (and especially) because in the text of the great British author are numerous elements that could not fail to spark interest of the director. Roald Dahl, whose biography is so crowded with negative events that not even the most sadistic of the writers could attribute them to one character, knew how to speak directly to the young (and not only them) of pain and suffering, but without false modesty he was also aware of having to show them the way of hope. The Spielberg film has always been done innervate, since the days of Duel by these two elements declining them in different ways over the years. Also doing precisely and forcefully the issue of diversity that is essential for Dahl. Sophie is different in that an orphan, is different in that divergent from the provisions of the institutions (like Matilda) and is a dreamer with more open eyes closed. But also the GGG is a different in her world in which it is in fact a midget (many developments in the film has this discrepancy of looks and assessments between Humans and Giants!). Among them wins a solidarity not initially expected that leads them to form a team ready to take risks but keep in front of him like a beacon the feeling of Kindness (which, after Cinderella, seems to have become a bit ‘the leitmotif of Disney) .
Violence and ignorance remain the preserve of those who are only able to smell prey and not to see living beings but also for them the final outcome will not be death. If to this is added that the part of the movie about Buckingham Palace is pervaded by the benevolent irony that only an American can exercise against the British monarchy, one can understand how Steven has proven a great pleasure to tell the story of Sophie and GGG.