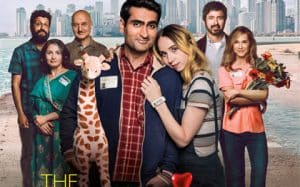 Kumail is a stand-up comic that earns a living as a Uber driver. Born in Pakistan and moved to the States, he tries to reconcile tradition and American life. He does not do it for himself, Kumail is anxious to escape the problematic contact with his roots, but for the family who sets his marriage and would like it, in order (valuable) descendant doctor, engineer or lawyer. In front of traditional dishes, the mother needs a Pakistani girl to put in a file from which to catch the future bride. But the heart is not commanded and Kumail falls in love with Emily, a student of psychology.
Met at the bottom of a monologue on the stage of a Chicago Comedy Bar, Emily forces Kumail out of her comfort zone. Kumail resists lies and omissions until the day the girl is hospitalized for a serious infection. The coma induced to reduce metabolism and encounter with Emily’s parents ‘awaken’ Kumail.
It was from the nineties, a lucky decade for the genre, that a romantic comedy did not leave a smile on the face. A persistent smile that accompanies you home. It all starts with The Big Sick, Michael Showalter’s comedy spoiled by the title. Because the disease that affects Emily and ‘suspends’ is the key figure of the story, it is something that happens to others, to Kumail and to ‘in-laws’. Since that moment the love story does not belong to her anymore, the game of seduction moves and acts between her parents and her (ex) boyfriend. To mirror it is the relationship of the ‘old’ of Kumail with young Pakistani women parading on their sofa in the hope of combining a marriage with the boy.
Exhilarating and painful, without a clear trajectory and with a big gap, The Big Sick is a rom-com that produces a quiet earthquake and leaves behind a new and fertile imbalance. Reason and heart of the comedy are Kumail Nanjiani, screenwriter and performer who brings to the protagonist the warm humor and perfect mastery of an actor-entertainer’s times, and Emily V. Gordon, a writer and spouse of Nanjiani interpreted with brilliance by Zoe Kazan. An artistic couple tested by illness and culture shots, he transfigures his life into a script directed by Michael Showalter and produced by Judd Apatow, recognizable in the agile irruption of the gag and in the payment of an inexorable melancholy.