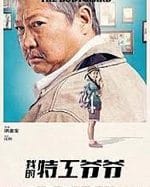 Former elite bodyguard, belonging to the CSB (Central Security Bureau), Ding is now a respectable retired with Alzheimer’s, retreated to the tranquility of Suizhen, a Chinese town close to the Russian border. All that Ding remembers is that he has lost his nephew and, for this reason, never being forgiven by his daughter. He is fond of Mrs. Park and small Cherry, daughter of Li, a persistent indebted gambler. When these are hunted in a big deal with the Russian mafia, Ding will have to resort to his deadly self-defense technique again.
In spite of high expectations, driven by misleading marketing, Sammo Hung’s return to the camera at the age of twenty years from the co-director of Once upon a Time in China and America is a productive disaster. The tight-eyed gaze that Hung keeps throughout the film would want to convey the memory of a person’s private memories, but it seems more to testify to the disbelief of an ancient master in the face of the nadir of his career.
Not a single sequence of The Bodyguard rises above a standard of absolute mediocrity. And if, given the nature of such a film, one can also overlook the deception of action-free sequences – with the barbed wire from removable hooks on the border between Russia and China we are in the trash, involuntarily – the action segments are less tolerant: Quantitatively scarce the “martial” scenes, and in general unworthy of Hung’s fame. Close-ups hide the gesture instead of exalting it, the ralents abound, as well as a mounting that tends to blur the shot, a sort of old step-framing technique of centuries for aesthetics and effectiveness. A surprising result, despite being far from the director, Hung continued to provide his valuable contribution as a choreographer, giving the movies of contemporary martial arts the duels of Ip Man 1 and 2 or Detective Dee and the mystery of the ghost flame.
The contrast of exasperated violence – cramped tendons, broken bones with detail in computer graphics, brutal massacre of the white weapon – and tenderness melancholy – disguised grandfather’s little girl’s designs, ice cream, fishing trips – is deep and very close to tradition Hong Kong. Almost a trademark if you think about Pedicab Driver, one of the most flattering performances of Hung’s director. But in the face of the contentious and formal empty disarming, this contrast remains only an artificial approach of sensations, devoid of guidance and sense. The Bodyguard thus succeeds in not working in any aspect: the direction of the actors, staging action, rhythm and involvement. Only the most desperate fans, willing to see the cumbersome figure of Sammo on the screen or recognize various celebrities of Hong Kong cinema, might be of interest to them. But let’s talk about a niche of nostalgics, the only slice of public willing to overlook the enormous shortcomings of a product assembled by force, without any real need to exist. And with the further aggravating of an obvious governmental imprimatur, guided by the impeccable police and regular Chinese army.