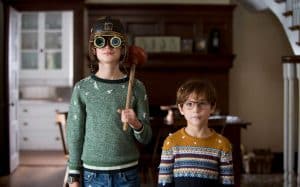 The book of Henry

Susan Carpenter is a single mother of two children, Henry and the younger brother Peter. Henry has a crush on Christina, the daughter of police commissioner who hides a terrible secret. Henry, to help Christina, decides to write a book which reveals the plan to help the girl to escape. When the mother Susan discovers everything, he decides to help her son to put his plan into practice.