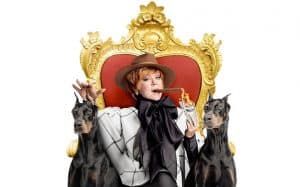 Michelle Darnell, despite his difficult childhood, has become the 47th richest woman in America and never misses an opportunity to remind everyone. It ‘so much unloved by its competitors who do not wait to make them pay for their success with brisk methods. The opportunity presented itself when Michelle is arrested on insider trading accusation. Despite the void that has been created around the time of leaving prison Michelle decides not fall. He decided to start organizing a group of very young volunteers committed to seeking funds for social activities.
Melissa McCarthy, backed by the success and also the quality of Spy, makes a misstep to the roots of which is probably the family. Because Melissa is the wife of the director and co-writer of the film Ben Falcone and, as shown at Cannes Sean Penn and Charlize Theron, there is nothing more dangerous for an actress to rely on partners. Which it puts at your service but can not find the right fit and, above all, it does not have the will or the strength to contain the exuberance in this case. Because The Boss could be an acid comedy and politically incorrect on a child brought up in an orphanage run by nuns (like the Blues Brothers) that an adult feels a deep need for revenge on everyone and everything, followed by a faithful assistant (here entrusted to Kristen Bell available to a supporting role).
The physicality of the protagonist was available (is exploited as usual for falls) and also her safely and use a language devoid of prudery. It decides instead of setting it all about managing a bunch of Dandelions (a kind of association of Girl Scouts) passing, thanks to his leadership, from a fearful looking for funds assault roles complete with a split of these as a small army. Meanwhile, the most famous and ironic dwarf actor in the world (thanks to Game of Thrones) tries to counteract the return.
The desire for a happy ending then does the rest and invites to suggest the viewer to see the compilation of input errors in the credits that make you laugh more than most of the film.