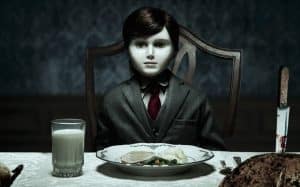 Greta Evans, a young American woman, accepts a job as a nanny at the Heelshire, a prominent British family living in a large mansion in the English countryside. When he arrives, he meets Greta sympathetic Malcolm, making food deliveries to the villa and then also knows the Heelshire, a pair rather advanced in years, very British and haughty. But nothing that can prepare it to what turns out: Brahms, their son which should act as a nanny, is actually a life-sized doll. The first reaction of Greta is a nervous laugh. The operation of Malcolm, who acts as if everything was normal, makes her understand that maybe the right attitude is to accept the situation as, indeed, if it were normal. Greta thus begins to look after the doll like a real baby and to take knowledge of the habits of the house, including traps against pests. The Heelshire go away for a long holiday leaving Greta a precise program to be followed for Brahms. Of course, alone with Brahms, the temptation to Greta is to treat it as a simple doll, disregarding the rules of Heelshire. But things are not as they seem.
The theme of the doll or the doll – and potentially sinister inanimate representations of living beings – has often been at the root of horror films, because of the concern that a doll is able to elicit with the only fixity of his gaze frozen. In this case the use of the doll is pretty ingenious, the situation intriguing departure. In fact, the film begins by showing the displacement of a normal person – still caught in a psychologically delicate period (runs away from an abusive partner) and out from the protective context of the society in which she lived – in front of a bizarre situation and abnormal.
Established the premise, the story plays on the classical uncertainty of the situation, the uncertainty that is the true nature of the doll and the influence that it has on Greta. Nothing new in this respect: it is the most beaten path in the field of dolls and puppets, in horror fence. The film then plays on the atmosphere, created with good efficacy in an austere and macabre English mansion, lingering over a situation that turns out to prove misleading in the concluding section, where the film is completely different register: the solution is not proof bomb in terms of credibility, but it testifies to the search of a narrative a bit ‘different and should not disappoint the fans. The tension is quite strong and the dosage of suspense leaves few dead moments, although the film adopts the first two-thirds of an adequate reflexive step above all the intention to create unrest generated by the environment and the psychological implications.
Good performance of the cast, in which stand Lauren Cohan (known in the horror field in particular for the television series The Walking Dead) and Rupert Evans, who give good credibility to their characters.
William Brent Bell boasts a history now consisting of horror field – you can recall at least The other face of the devil, a demonic found footage not entirely convincing, and the modern licantropesco Wer, the best artistic result – and here it shows capable of giving proper shape to a claustrophobic story and obsessive: the elegance of the style is suddenly abandoned in deference to the turning point in the story, but the director is also proficient in the most hectic. It left to wonder what might have been the film if he had remained faithful to his original nature, but the unsettling effect research is never contemptible because it is basically the search for originality.