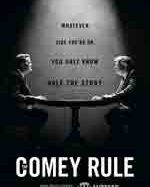 James Comey is named FBI director by Barack Obama even though they don’t agree on all issues. We have been following him from that moment through the story of Hillary Clinton’s e-mail and then to his torpedoing by Donald Trump following the investigation into Russiagate.
The two-part miniseries has an interesting genesis in itself. Following Bill Ray’s 2019 decision to write and direct it for CBS based on Comey’s autobiography and, with the collaboration of the former FBI director himself, the shoot was shot in Canada. So far everything ok.
There is the presence of Jeff Daniels in the main role, that of Brendan Gleeson in that of Trump as well as that of Holly Hunter wearing the role of Attorney General Sally Yates fired by Trump 10 days after his inauguration. The problems begin with distributor Showtime’s ‘prudential’ decision to air it ‘after’ the presidential election. Ray’s clear reaction was needed to rethink Showtime which led to it being aired on two evenings (27 and 28 September) in the US. This decision, although obliged by circumstances, has prevented the taking of a work that serves, at the same time, to clarify but also to remember what kind of person the current president of the United States is.
The narrative is constructed in the form of the flashback commented by Rod Rosenstein, the Trump-appointed Attorney General who was credited with the dismissal of Comey. Obviously Ray is on the side of the Director of the FBI but even the most staunch supporter of Trump cannot escape the vision of the development of events and the reading of the personality, although partially emphasized on the side of the FBI’s appeal for total integrity. , Comey in a particularly complex turning point in American political history.