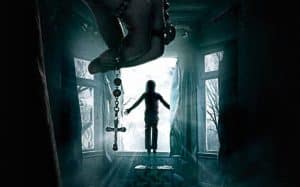 1977. During a seance the medium Lorraine Warren tries to get in touch with the author of the carnage of Amityville to know the reasons for his action, but on his supernatural path runs into a demon that takes the shape of a nun. Meanwhile in Enfield, in Britain, the Hodgson family in dire economic straits, lives in a house in which successive unexplained events. The small Janet is the most sensitive to these appearances, which seem to claim ownership of the house threatening the current tenants.
Destined to become the largest franchise in the horror field in recent years, after a spinoff so successful as to generate in turn a sequel, The Conjuring arrives awaited second chapter. Starring again the Warren and a haunted house, in free reconstruction of real-life case of Einfeld, the British Amityville, one of the main cases of recent times for parapsychological interest.
James Wan is not afraid to resort to repetitions and, economy of a series structured, it makes sense. Beyond the obvious similarities of narrative, The Conjuring – The Enfield case differs in many points from the first episode. Where Evocation – The Conjuring pointed especially to horrific spikes, mixing influences seventies to new audiovisual techniques of fright, the sequel prefer to work on the constant worry and try to reflect on the rules of the game, instead of applying them to the letter again.
The points where The Conjuring – The case Enfield does not excel and does not intend to excel – originality of the plot, of the setting accuracy – are clearly deemed minor by Wan, to make scenes like those on Warren to America, before their trip to UK , the clumsiness of the limits. Or the use of “London Calling” by The Clash, to introduce the reality of Hodgson, one of the most obvious and unnecessarily noisy use of a soundtrack that recent history.
A Wan particularly interested to play with the camera – tireless, fluttering and ubiquitous – on the most worn cloth, look for a new perspective and a new form of horror sensation. Although the nightmares of the magic lantern, the man “wrong” or what seems demonic possession remember innumerable predecessors, the technique with which they are replicated can, in part, to infuse them with new life. Except for some slip in digital, Wan remains balanced on the invisible border “see” and accept a supernatural truth become one, as exemplified by the masterful sequence in which Janet seems possessed by Elder Bill but the machine taken remains of Warren and the change in his expression, instead of probing the unknown.
Too bad that a predictable outcome and a verbosity unjustifiable nullify much of the directing efforts, returning at the end of The Conjuring – The case Enfield a feeling of fatigue by accumulation of signs instead of pure dread or uneasiness. But the series held, the audience what it wants and is already talk of a spinoff dedicated to the new villain.