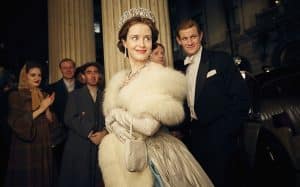 The Crown The series tells the story of two of the most famous addresses in the world, Buckingham Palace and 10 Downing Street – and intrigues, love affairs and machinations behind the major events that shaped the second half of the twentieth century. The young Princess Elizabeth is faced with the prospect of becoming the future Queen of England in an era of decline for the British Empire and the world itself.