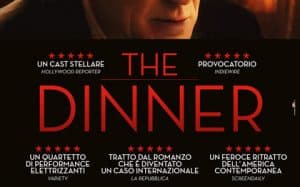 Meeting up with their wives for dinner (Laura Lynney and Rebecca Hall), brothers Paul (Steve Coogan) and Stan (Richard Gere) find themselves discussing a serious crime their teenage children are guilty of. The evening turns into a family drama when the two couples have to decide how to handle the delicate issue by getting the lesser evil. In fact, there is not only the future of the boys but also that of Stan, a famous politician in his career and already in the election campaign.
Room drama with a political background and therefore existential in the deepest sense of the term, The Dinner of the Israeli New York resident Oren Moverman is the third film adaptation of the Dutch novel of the same name Herman Koch, first edition in 2009 and then of immediate worldwide success.
To precede Moverman were the compatriot of the writer Menno Mejyes in 2013, followed the following year by Ivano De Matteo with our boys. A proliferation of cinematographic transpositions so intense helps to explain the interest in urgently popularizing the text of Koch, where the focus lies on issues related to the range of family responsibilities, civil, social, humanitarian and political that a human being must assume in adulthood . The neuralgic and intimately moral heart of the text questions the direction to take when the different forms of such responsibilities conflict with each other: what decision is more ethical between denouncing their children for committing murder or defending them by hiding their guilt in an attempt to create for them a “domestic repentance”? If at the base of the novel undoubtedly lies a return to the Original Sin of each, in the American transposition this sin wants to find its historical location: the fatal attraction to the war of which the Americans are inevitably victims.