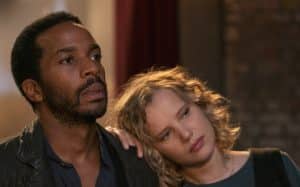 Elliot Udo is a renowned jazz musician, but after the death of his son he stopped playing and moved to Paris, where he opened a club with his friend Farid: The Eddy. Here too, however, things are not going very well, both in economic terms and with the band for which Elliot writes the music. The Maya singer with whom she had a story is now in fact on course with him. In addition, Julie, Elliot’s daughter, arrives in Paris, with a volcanic character and self-destructive behavior. The girl, who quarreled with her mother in New York, refuses to go to school in Paris but Elliot, immersed in various problems, cannot devote to her the attention he would need. To precipitate things there is then a tragic event that occurs in front of the entrance to the room.

Series packed with music, where the band plays itself and plays live, The Eddy also opens up to some crime elements and is a fully successful experiment.
First of all, precisely because of the level of music on the pitch, which will delight jazz fans but which is also very enjoyable by the general public. Furthermore, the casting work on the musicians / actors gave excellent results, not only with the singer Maja played by Joanna Kulig, who already boasted a conspicuous career between cinema and TV, but also with the other musicians and in particular with Damian Nueva and Lada Obradovic. They play bassist Jude and drummer Katarina respectively and are the only members of the band besides Maja to have a dedicated episode, which they hold with remarkable grace. The rest of the cast is very solid, starring the always excellent André Holland known to movie buffs for Moonlight and to the more refined television audience for Steven Soderbergh’s The Knick.
The role of Elliot requires him to work on different registers: on the one hand he is traumatized by mourning and introverted and on the other near explosions of anger when exasperated, but in the best moments he is also attentive, affectionate and endowed with a relaxed and a brilliant look, behind which a musical genius must shine through. Definitely in part also the French actors involved (the series is mostly spoken in French than in English): Tahar Rahim, an international talent exploded with The Prophet, had already reached the US seriality with The Looming Tower; Leïla Bekhti is a more local star, but she has also been seen in Italy in 7 men soaking; also have a small role Tchéky Karyo and the Australian Melissa George.
In short, this is a production with all the trappings of prestigious TV, in fact the director of the first episodes was called an exceptional director, who has already worked on jazz since the beginning: Damien Chazelle. His footage is all in the camera by hand, but used in a virtuous and sometimes whirling way, almost like he was improvising a jam session. There are applause solos such as an initial sequence plan and instead more confused but always vital and energetic moments.