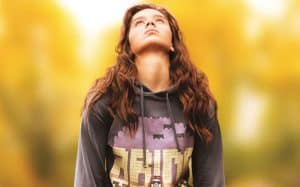 The Edge of Seventeen

Growing is not easy and certain seasons never seem to pass, especially those around the age of seventeen, the age of the border and the crux of expectation, disappointment and infinite revival. In this panorama, the only comfort of the tormented Nadine is her best friend, Krista, who appeared as a lighthouse in her life at the darkest and never abandoned moment. When, however, Krista relies on her brother, the being Nadine more envy and despises, even that special friendship seems to have come to the end. Despite suffering and loneliness, in fact, Nadine does not seem willing to forgive her.
There is a great courage in this film, on various levels. There is the courage to go like a story that resembles a thousand other stories, to propose scenes that resemble other scenes from other movies, and then instead to continue to press the pedal, where other stories and other films would begin to slow down and would be Quickly return to the happy and happy garage.
And then there is the courage of Hailee Steinfeld, who after Grinta has no longer found a role to put her in the same light, and yet she is always good and here she is not afraid to interpret a character that may appear irritating.