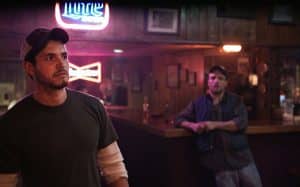 Cole lives in a rural town close to the Appalachian Mountains hit by the economic recession in a visible and palpable way: closed mines, small companies in bankruptcy, empty churches, unemployed young people, alcohol and drugs. One of those places that form the consciences of those who were born and raised there, for better or for worse: this is how Cole is an assistant in a retirement home, they show his love for the elderly in the community but he sells under the counter the drugs given to them by a system that otherwise does not care at all. The inhabitants of the town are divided between the God-fearing people who quote passages from the Holy Scriptures – including Cole’s grandfather, a pastor obsessed with Satan – and more or less overt transgressors who populate the smoky premises and the caravans parked for life in the deserted spaces. When a friend of Cole’s youth returns to town, unemployed and intent on expanding the drug business, the boy finds himself having to decide whether a long-term date is an opportunity or a sentence for him.
The Evening Hour is an atmospheric tale that feeds on the specificities of that marginalized America far from the places where the fate of the country is decided.
The desolation surrounding Cole is cut with a knife, and his relationships are marked by a mixture of solidarity and mistrust, the comfort of habit and the desire to escape. Cole is a child of guilt, whose mother Ruby had to abandon him and the town where she grew up, and no longer knows who to trust, or how much others can truly trust him.
If on the one hand the photography of veteran Declan Quinn, whose similarity of tones we remember Via da Las Vegas, adheres beautifully to the landscapes and interiors of this melancholy story, on the other hand the interpretations of the cast know of textbook indie acting particularly that of Michael Trotter in the role of the messed up Reese.
The direction of Braden King, former author of Here, is placed in the middle, trying to return the authentic suggestions of the novel by Carter Sickels on which the story is based, but failing to escape certain conventions from the Sundance Film Festival. The two most welcome returns in the cast are Lili Taylor, who lends her sweetness to Cole’s mother, and Tess Harper, who plays the role of grandmother.