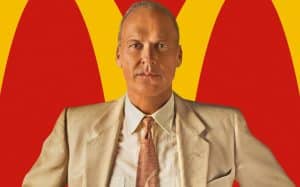 United States, 50s. Ray Kroc, a vendor of blender for low-priced catering establishments, faces Mac and Dick McDonald brothers who started a profitable hamburger sale in San Bernardino in Southern California. Kroc immediately understands that this is an innovative method of preparing, cooking and selling a retailer of highly-requested food, given the high number of customers who crowd in front of the kiosk. It is so easy to do to start a franchise. But it does not stop there.
There are more than dozens of essays to explain how a ‘company’ works to make ‘legally’ deprive people, allowing those who do the job to get rich by the intuition and the sneer for their affairs she’s talented. Documentary and often negative films on the empire of cooked and eaten hamburger have been produced different and some have also got a certain audience. However, nobody had yet touched on John Lee Hancock’s (a biopic-biography director) look at the path followed by his founder. It is what happens now and the launch that reads “The genius that founded the empire of fast food” has an ambiguity that must be read deeply. Because Crok certainly had the genius to understand how the assembly chain in the preparation of burgers and the quality of the raw materials used by the two brothers had all the features to embody, at least initially, on a national scale. However, the definition of ‘genius’ could add to the “bad” specification because Crok not only, thanks to a escamotage that shifted the shot from the sale of burgers to the real estate of the many openly affiliated branches, could break the contractual ties with the two Brothers but took possession of the logo and of their own surname.
In order to offer such a personality the right balance between entrepreneurial spirit and liberal liberty without any ethical remorse required the right performer. John Lee Hancock found him in a Michael Keaton to the best of his already remarkable performance as an actor. In his eyes and in his gesture, one can read, sometimes at the same time, the enthusiasm of those who are implementing an idea that others have not read the potentialities and the greed of those who see progressively open the doors of the Business with ‘Capital case. Like the M arc that will mark the brand that was about to invade the States and then the world.