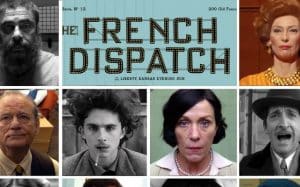 If there are Owen Wilson, Adrien Brody and especially Bill Murray, then it can only be a film by Wes Anderson, which returns to theaters after the Grand Budapest Hotel. Set mainly in a French city, The French Dispatch tells the story over a long period of time of an editorial staff of an American newspaper. In an endless cast of stars the main role is of Frances McDormand for a film that wants to be a sort of love letter for the journalistic profession, as stated by the director himself. The story is set in France, where Anderson has lived for years.