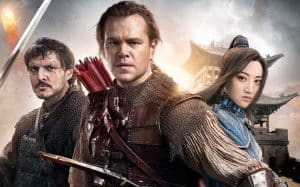 William and Tovar are two European mercenaries in China with a mission to retrieve a bit of the “black dust” antimatter of gunpowder and take it to the West. The two survive the assault of an unknown creature of green color, of which they retain a cut limb. Captured by the elite troops of the Chinese army, they end up fighting at their side against the green monsters called Taotie, who every 60 years threaten the world of men. The Great Wall was erected just to try to stop them, by all means.
It is difficult to free The Great Wall from the context in which it originates and the intent that characterizes it genuinely. As much as Zhang Yimou has shot in the last twenty years, there is a precise purpose for the existence of The Great Wall, with bulky political and economic reasons.
China wants to demonstrate to the world what it is capable of and once again it is impossible not to be admired in the face of the choreography magnificence, the use of extras for mass scenes, the use of a vivid and awesome 3D rendering. But it is as if the Chinese industry, which is making more and more expensive blockbuster repetition, is to overcome itself on the mere technical level, content with the fact that for an audience that has come from decades of denial, it is all right. As someone there begins to observe, there is nothing left to Chinese commercial cinema to aspire to a primacy that is at all levels: and it will not be The Great Wall to change things, if not (perhaps) as a result of a failure to Outside the patriarchal boundaries.