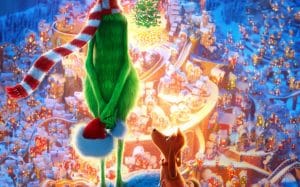 Above the town of Chissarà, inside a deep and comfortable cave, lives the Grinch with his dog Max. Green, hairy and lonely, the Grinch hates Christmas, hates the assemblies of people, the cheerful and cordial spirit and above all the do you sing. For fifty-three long years he has endured it, but now he can not take it anymore and takes a radical decision: he will steal Christmas from the ChiNonSo. Nighttimes, will take away all the gifts, decorations, happiness. So yes, they will stop singing. Or not yet?

Back to the cinema one of the most famous characters in the rhyming tales of Dr. Seuss, thanks to Illumination Entertainment, who had already done great things with Ortone and the world of Chi and Lorax.
If until today the Grinch at the cinema wanted to say Jim Carrey in the Escherian film of the beginning of the millennium signed by Ron Howard, from this moment on it will be able to feed another preference, for this return to the animated design, from the similar traits to the illustrations of Theodor himself Geisel in art Seuss, but basically softer and close to a traditionally intended Christmas tale.
To the anticonsumistic fable, there is also a short backstory to Tim Burton, responsible for the attitude of Grinch, which prevents him from appearing really mean: insecure, only above all, but not really without a heart. Rather close to a certain Gru, who, like him, knows something about plans for theft in great style and small creatures to take care of.
The Meledandri character, who in Italian has the voice of Alessandro Gassmann and in the original version that of Benedict Cumberbatch, is in fact a sweet hearty from the beginning: grumbles, makes some spite, but you can not help but cheer for him. And the same goes for Cindy-Lou Chi, around which the film builds a story of a real co-star, a small world made of a stoic and desperate mother, a best friend, a support band and a dream in the drawer, intended to meet and meet with the Grinch the fateful Christmas night.