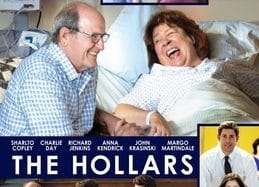 John awaits a son from Rebecca’s girlfriend, but must temporarily leave both New York and New York to return to the county town where he is from, because his mother is in the hospital. The diagnosis is serious and the Hollar family meets while waiting for the operation. In addition to Father Don and Brother Ron, John also finds former fiancé Stacey, married to a very jealous nurse. Meanwhile, John crises even on the personal front, having lost all confidence in himself and in his creative abilities.
John Krasinki, at the second director, chooses a comedy that knows how to speak lightly even with painful arguments, but they are all experiences of everyone. His character, and his homonym in the film, stands perfectly in the middle ages, between being son and being father, both conditions from which it is impossible to escape but also not to overwhelm. The discovery of the film (once it would be said “morale”) is that nothing needs to be distressed at once, we will be ready when we are ready, we will be well when we are well: at that point we will certainly know, we will have a strong perception Clear, that will scare the fear. Sounds tautological and self-evident? This is also the limit of the film as a whole: there is, in fact, nothing that can not be anticipated in advance and that it is not in line with the genre (now it can be called so) of reference, that is, the independent tragicomedy on a Crazy family who has to get to the break point to get together firmly together. Yet, on the one hand, this predictability is driven by a often brilliant and really comical dialogue, and on the other hand, it translates into a modesty that does not damage the film, keeping it rather in a dignified medium, where there is a balance Between the parties, despite the unbroken alternation of comic and more serious or moving comic scenes.
Characterizing The Hollars is also the gender talk: not to resist the tears, to denounce their total dependence on the other sex, to go beyond hysteria, bad conversations and headshots, are not women, as happens In many comedies: here are the men. The protagonists of this existential test, the turning of a difficult passage, for everyone in their own way, are the three Hollar males, while the two women pass the witness at the top, leading the psychological and affective family business. That all is entrusted to a skilled and capable cast, most of the time, not to end over the lines, is another point of excellence.