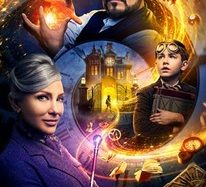 The House with a Clock in its Walls

Lewis is ten years old when he loses both his parents in a car accident and is forced to move across the country, to the home of his uncle Jonathan, the mother’s brother he has never met before. If his uncle is immediately eccentric, his neighbor, Mrs Zimmerman, is not less, and the house itself is more than anything. Among animated objects, mysterious ticks and unruly herbaceous lions, Lewis makes the acquaintance of a magical and fascinating world, which hides, however, also some dangers. And it will be a disobedience of the boy to awaken from the afterlife the most threatening of them.
The horror director Eli Roth and the ace of the comedy Jack Black make a curious alliance to bring to the screen the first of the twelve books of the series of John Bellairs, originally illustrated by Edward Gorey, whose inimitable trait coexisted scary, macabre and disturbing even for adult eyes, and a stylized and elegant beauty.
Roth, with a completely different language and a powerful use of color, in turn manages to set up a visually elegant (and definitely more baroque) film, establishing a veritable dominance of the image on the story, and not in disguise but because that’s what the script asks itself. In fact, as Lewis teaches, magic is a matter of style, and there is no doubt that Clate Blanchett, with her purple suit and her hair gray with an irreparable pain, has a style to sell, and so it is Uncle Black, in a robe-kimono, and also for the character of Lewis, who owns her from the beginning but will have to learn to make it a source of pride and an identity element.
The film also works naturally on time, using the concept as a key that opens up different scenarios: set in the fifties, it takes as a model the classics for boys of the eighties, for the combination of fear and fun, but also puts on stage a couple of adult protagonists who live an evident nostalgia for a much longer time, a metaphor of the past itself, of what has not yet been hurt or disappointed by the advance of maturity: they will have to grow up, putting aside the hyper protective temptations.