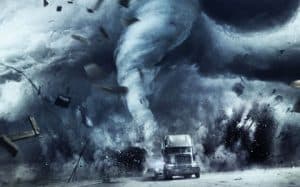 Rob Cohen would have been able to live on film medals worthy of a certain respect.
He is in fact the director of the first Fast and Furious, he directed XXX, as well as a good quality fantasy like Dragonheart. Then one wonders why, in a sort of ‘cupio dissolved’ for some ‘time in this part you rely on screenwriters (here you are put in four) that offer a basic material that makes you regret so many B-movies .
Specifically, just make a small effort to remember films that, in that subgenre that is the catastrophic-meteorological, have faced the big screen or have unleashed the forces of nature directly in front of the sofa at home. There are interesting examples like Twister or even the weaker Geostorm that Cohen tries to emulate without being able to approach the models. Of course some jokes do not help. When you see Will, looking at the sky, he shouts: “They are underestimating you!” one wonders if those who have thought of it have ever read at least a manual on how to write the scripts.