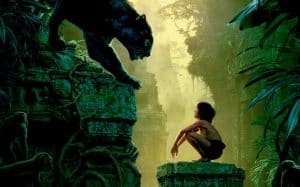 The cub Mowgli the man he grew up with the pack of wolves and Akela mother Raksha, within the law of the jungle. When the water truce, however, Shere Khan the tiger back to look for him: she does not have respect for the other’s territory, and until he has all the wolves Mowgli will be in danger. The child decides to leave the herd, to protect it, and Bagheera the panther, who first brought him to the wolves when he was very small, undertakes to lead him to where he came: to the village men.
The journey to your destination is to become a man, or accept this, and passes, for Mowgli, from the knowledge of other animal species (the precious elephants, architects of nature, or the ambitious King Louie monkeys) and in company life Baloo the bear, greedy and playful: half of the parental couple soft forming with Bagheera, the more anxious and legal, and that makes the Jungle Book a wonderful story of recomposed family.
Disney returns to the scene of one of his great classic, still beloved, and does so in the best way, that is, taking the animated film as a constant reference, in the succession of episodes and in the characterization of the characters, providing small changes that do not distort but coming back at the same time also to the original Kipling tales of English and, above all, rightly focusing on their specificity, or the live action, the coexistence in the same shot of a half-naked boy and wild and wonderful beasts, with a view realistic imagery that is the real proposal of the film.
In this sense, the Life of Pi visual previous anticipates but does not affect the impact of Jon Favreau’s film, which debuts with a very physical and dynamic sequence (Mowgli the foot race up and down huge trees, exasperated by 3D ) then toggle later fluidly action and emotion and even succeed in the shot, almost shy, as it is precisely the most heartfelt tributes, of the classic ’67 song, without letting it be out of tune.
In the interests of dialogue between innovation and shooting, then, it is the most effective of the film, which, if the visual play of surprises strong and sizes revised and distorted, the script works at your fingertips, giving the vultures to the scene of the buffalo, touching up the meeting with the character of Baloo and Kaa, but always within the limits, bringing us back each time, at the end of the scene, to known image. Thus proceeding, you get to the final, which says its (compared to previous Disney but not to the book, which has a structure and a temporality different) when we are finally ready to welcome the gap, and interprets, with wit, a common desire to many generations.
The young Neel Sethi, the protagonist of an adventurous and imaginative work as much as the subject of the story, made of sets partly real and partly digital, actors in mo-cap suits posing as animal puppets and huge speakers all committed to do not leave him alone in the enterprise of acting, it is the perfect face for this novel material and spiritual formation, which complements the animated film without replacing it, replicating the recent and successful formula of Branagh’s Cinderella.