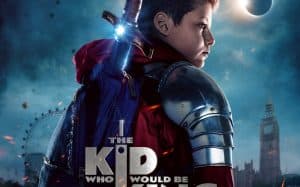 The Kid Who Would Be King

Alex, a 12-year-old English student, accidentally discovers the mythical Excalibur sword and manages to extract it from the rock like the young King Arthur. For him, a shy boy who grew up only with his mother, is the beginning of a journey that will lead him to defend England from the invasion of the forces of evil and from the perfidious Fata Morgana, who woke up after centuries of sleeping underground. To help Alex, destined to become “king forever”, there are the new “knights of the round table (his best friend Bedders and the two former bullies Lance and Kaye), a Merlin wizard with multifaceted features and, at the moment of the final battle , all the other students in his college.

From the director of the cult Attack the Block – Alien Invasion, the boy who will become king is a review of the legend of King Arthur and the knights of the round table, between irony, tributes and updates to the English tradition.

In times of continuous revival of the 80s, it is not new to witness the adventures of a gang of kids who in Goonies style challenge Excalibur with an army of warriors from the underworld. In The Boy Who Will Become King Joe Cornish softens the angular and ramshackle tones of his debut – in which some dropouts in the London suburbs had to save the Earth from an alien invasion – but confirms his taste for the accumulation and reuse of elements of pop culture.

In the adventures of Alex and his companions, in addition to a model of children’s cinema forged by Spielberg about forty years ago and today fully become a form of story (from Stranger Things down), there are echoes of Sam Raimi, Ray Harryhausen, John Boorman, Terry Gilliam, especially from Disney’s The Sword in the Rock and even before the model of that film, the twentieth-century reinterpretation of the Arthurian cycle by TH White.

The title of the first novel by the English writer, “The Once and Future King”, which appears in the film in a ticket written to Alex by his absent father, unites the protagonist’s private destiny (played by Louis Ashbourne Serkis, son of Andy, the famous motion capture interpreter of the Gollum of the Lord of the Rings) to his destiny as commander of a people. The intimate and familiar dimension is in fact fundamental in this new version of the myth of King Arthur, in which not a single drop of noble blood justifies the call to the throne of Alex and just normality is a guarantee of its value.