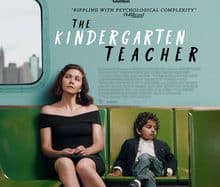 Lisa Spinelli is a kindergarten teacher with a passion for poetry, so much so that her children, now almost adults, find her transformed by the lessons she is following and her husband feels a little neglected. Lisa is not in itself very gifted, but she knows how to recognize the talent of others and remains dazzled by that of a kindergarten child, Jimmy, who occasionally walks back and forth as if in a trance reciting impressive poems. Lisa decides to protect him from a society indifferent to his talent and does everything possible to educate him, but going far beyond the limits of his profession to undertake almost a personal crusade.

Remake of an Israeli film of the same name by Nadav Lapid of 2014, The Kindergarten Teacher is the story of a woman who finds a passion for life in front of the mid-life crisis and embraces her in an all-encompassing way.

It is therefore a story of hope and despair, born of the disillusionment of adulthood, of resignation to the broken dreams of a mother who would have liked more from her children and perhaps even from her marriage. However, it is not a woman who throws herself into another relationship (although she is close to us), but rather a personal project of absolute purity, which puts her alone against everyone, including her colleagues, institutions and even the child’s parents. who would like to help and who is tragically the only one to see talent. Even his teacher of poetry will turn out to be a total disappointment and in some ways even the little Jimmy will betray her in more than a moment, but this does not affect his belief in being right and basically the film almost ends up giving her reason, with a tragic conclusion in its own way.

At the center of this remake, more or less faithful, signed by Sara Colangelo is Maggie Gyllenhaal, in one of her most subtle and intense rehearsals. Everything else is contoured, even if there is no shortage of familiar or promising faces, from the teacher of poetry interpreted by Gael García Bernal, to the babysitter who has the face of Rosa Salazar, the next protagonist of Alita: Angel of the battle, up to Michael Chernus seen in several quality TV series like Manhattan and Patriot. The Italian-American director, awarded at the last Sundance Film Festival just for direction, before The Kindergarten Teacher had signed a single feature film, Little Accidents, unpublished in Italy. A happy career is waiting for her too, especially considering the current interest in Hollywood for women directing.