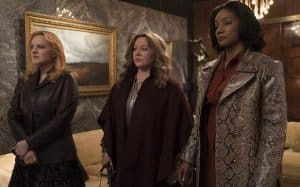 The wives of the New York gangsters were the protagonists of the hell of the 70s, when they continued to operate the husbands’ racket tour even when they had been locked up.
The film is based on Vertigo’s DC Entertainment series. The characters are Melissa McCarthy, Tiffany Haddish and Elisabeth Moss, three 1978 Hell’s Kitchen households. Their husbands are sent to jail by the FBI. Ladies take the problems of the Irish Mafia in their own hands. They prove to be able to do it.