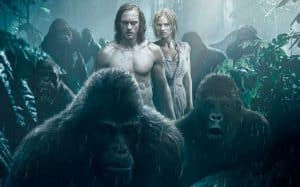 The Legend of Tarzan

Lord Greystoke lives in London, in the elegant family home, with his wife Jane. When the government invited him to return to the Congo, he refuses: Tarzan, he says, is no more. His name now is John Clayton III. They will pressure African American George Washington Williams, determined to prove the guilt of Belgium relating to slavery, and the demand for Jane, to do so choose an afterthought. In Africa, the waiting animals friends, but also enemies old and new.
Pale, almost eerie, and as the need arises, however, agile and passionate kiss in the neck: the Tarzan Alexander Skarsgard comes forward as if it came directly from Bon Temps True Blood. We know that the multi-layered clothes that he and Margot Robbie wear when doing their knowledge are bound to fall by 90%, to a pair of ripped shorts and little more. The question, then, is: how to tell David Yates this transformation? And the reply comes from the recently beaten path from the Jungle Book to land the superhero-movie.
Proceeds thus partially backward, The Legend of Tarzan, not toward civilization dell’enfant sauvage grew from apes but towards a return to nature as a place of loyalty, no tricks fight, fertility. The film, which in the end fun and entertaining enough, or slightly below the threshold, however, also suffers from some skin disease, or of some visible defects on the surface, such as a computer graphics not excellent (nothing to do with the elegance and extent of Favreau’s film, and the emotion that it followed), and oozing concern for political correctness, from which the theme anticolonial and rooting in the historical truth of the clash between former soldier GW Civil War Williams and King Leopold II of Belgium.
At bottom, however, the Yates Tarzan is also a rimatrimonio comedy and above all a return to the primitive character of the American accent character ER Burroughs, already conceived in a pop, halfway between the myth of the Far West and that of Superman, including fumettone ecologist and fearless disregard of the ridiculous.