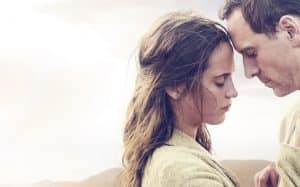 The Light Between Oceans

Tom Sherbourne is a former British soldier who gives up the quiet. Broken by the horrors of the Great War, he asks to be assigned as a lighthouse guard at Janus Rock, beaten by the wind and a few miles off the coast. In the journey she meets Isabel, an intrepid young woman who asks her to marry her. Spreaded by its beauty and energy, Tom ‘accepts’ and begins to live. But love is not enough to face the storm threatening the horizon: two spontaneous abortions and a baby girl brought by the sea that the natural mother back to claim.
Revealed by Blue Valentine, birth and agony of a wedding in the deep American province, Derek Cianfrance makes a different film in tones and modest in the result. Adaptation of M. L. Stedman’s homonymous novel, Light on the oceans throws (literally) into the wind all the efforts to provoke emotions.
Suspended between two oceans and indecisive about the right thing to do, the Cianfrance melodrama is a lighthouse off against which an arsenal of intentions is found that can not be echoed in the spectator. The beauty of the paintings, the solemn visual rhythms, the ‘lush’ notes by Alexandre Desplat, the interpretative value of the actors, all of them ‘dressed’ by Michael Fassbender, are not enough to correct the ‘luminous reach’ of the film Remains inexpressive and unexpressed.
The story on screen has the breath of a novel by Nicholas Sparks while running the life of a clandestinely-built family. Because Tom and Isabel tease the fury of the sea and her mother legitimizes a baby for a few months. The film then interrogates a man and two women with a moral dilemma. On the one hand the drama of a woman resolved not to abandon the daughter she adopted and raised, and the drama of a mother who believed her daughter was lost. A little girl with whom she now fails to agree. Among them, a man collapsed under the weight of remorse and guilt. Given the triangle and their corners, the film slides smoothly by privileging the shape at the (pro) bottom. Cianfrance rides the wavey landscapes movement, eluding the inner marosi and the psychological deepening of the characters, in the face of their emotionality.