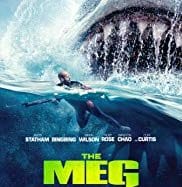 Jonas Taylor is an expert in rescue missions at extreme sea depths, but after having to sacrifice some men he decided to retire. At the futuristic station Mana One is discovered, off the Chinese coast, an area even deeper than the Fossa delle Marianne, but the explorers end up trapped on the seabed, so Taylor decides to return to action, since one of the people to be saved is his ex wife. Here he will meet face to face with a megalodon, a prehistoric ancestor of enormous sharks, who he believed he had already met in the past. The mammoth creature will eventually emerge from the depths and threaten the entire station in addition to the boats and bathers in the area. Only Taylor and Mana One’s team, including the fish biologist Suyin Zhang, can stop him.
Expensive Chinese-American co-production Shark – The first shark aims to the show in no uncertain terms and to the general public, so much so that blood and swear words are banned in favor of chills for families.
The most sexy scene in fact gives Jason Statham shirtless, an actor much loved by the Chinese market on which the film bets to try to recover the huge investment of a good 150 million dollars. A budget that took years to be collected, it is no coincidence that the novel of the same name by Steve Alten in 1997 (published in Italy by Mondadori) has seen various adaptation projects fail over the last twenty years. As in the contemporary Skyscraper, another South American co-production, the ability of Chinese builders with a spectacular architecture structure is magnified, but here, unlike the movie with The Rock, Statham shares the screen with the Asian star Li Bingbing, already known in West for Transformers 4 – The era of extinction.
The cast is entirely multi-ethnic, with the Japanese Masi Oka, the impressive Icelandic Ólafur Darri Ólafsson, the Australian Ruby Rose, the African-American Page Kennedy and the New Zealander Cliff Curtis, as indeed is typical of films featuring high-level scientific teams level, also the American Rainn Wilson, in the role of a multibillionaire, is the one who makes us the worst figure, again according to script. But everything goes too far according to the script, from the predictable jokes and written with the acceptance to the alleged plot twists, which moreover are never shocking given the absence of real violence.