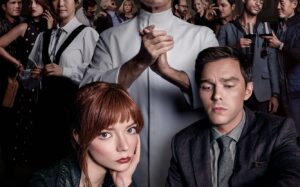 Tyler, an obsessive gourmet, invites Margot, a mysterious ‘girlfriend’, to accompany him to Hawthorn, a starred restaurant in the heart of a private island. It is managed, like a barracks, by Slowik, a chef of molecular cuisine who promises a dream menu garnished with revelations and surprises. Between one course and another, which Tyler savors voraciously, and Margot declines irritating Slowik, a macabre spectacle gradually takes shape. Surrounded by movie celebrities and financial sharks, delusional food critics and regulars, Margot is the first to feel the hostile climate. Meanwhile, her lack of appetite attracts the attention of the chef who makes a terrible revelation. Margot must soon understand the rules of the game or pay the price with the other guests.
In the history of ‘restaurant films’, The Menu aspires to get off the beaten track of culinary comedy (Big Night, Ratatouille, Dinner Rush, Délicieux, Sapori e dissapori…) and to distance itself from galvanizing television programs (“Hell’s Kitchen”, “MasterChef Italia”, “Dinner Club”…) built around explosive personalities such as the British chef Gordon Ramsay or our local Carlo Cracco.
Culinary horror, The Menu comes after Pig and Boiling Point in depicting the failure of a system and a world that no longer has its feet on the ground. At Hawthorn the price is $1,250 per head, including submission to the chef. You defer to his genius and in return he offers you transcendence on a silver platter. An effective introduction outlines characters and personalities who crave ‘experiences’ and venerate rarefied food, all except Margot, an outsider without wealth and without privileges who smokes cigarettes and doesn’t give a fuck about taste buds.
Like Pig, a culinary western between the countryside and the city, Mark Mylod’s horror comedy is the enemy of worldly sophistication, which has ended up corrupting its own scales of values. Seated his guests, inebriated with aged reds or frozen whites, he puts the spotlight on his chef who martially recites his food philosophy. The nuances are sinister but the diners are in ecstasy and do not see the underlying matrix code, until the third course, ‘engraved’ and personalized tortillas. And by then it’s too late.
The less we know about The Menu the more delicious the dinner will be, however we can reveal without doing damage, that the film resembles a stage show focused on the process of obsessively constructing each dish, and on the audience, obscenely rich and unarmed as soon as they are abused in a table conversation. On the other side of the front, an army of cooks responds to orders in unison and speaks only when asked. Their personal lives are devoted to the cult of cooking, they fry, ferment, measure, flavor, garnish, serve, uncork bottles and whip up the unforgivable faults of the guests. Dinner feeds on their sins and savors their humiliation to return to the bounty of simple things (hamburgers), finish with a bang and bring everyone back to reality. Food and its preparation are the main emotional vectors of the story.