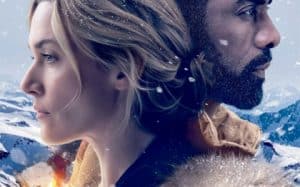 The Mountain Between Us

Two strangers meet at an airport check-in before embarking on the last available flight. Alex is a traveling photojournalist to attend her wedding, Ben is a returning doctor for a surgical operation scheduled the following day. When the flight is canceled due to bad weather, Alex proposes to Ben to rent a small private plane. In the middle of the storm, however, the pilot has an illness and loses control of the plane that crashes into the mountains of Colorado. Alex and Ben survive despite the injuries, but they know that due to a pilot error, the rescue will not come and their only chance is to go downstream, looking for the first sign of civilization.
Based on the novel by Charles Martin, A Mountain Between Us by Hany Abu-Assad, translated curiously into Italian The Tomorrow Among Us, is a hybrid odyssey between romance and adventure in the tradition of survival films, where only the performances emerge of the two great actors, Kate Winslet and Idris Elba.
The roles of the two protagonists initially conceived for Margot Robbie and Michael Fassbender, then offered to Rosamund Pike and Charlie Hunnam, were finally assigned to the actress of The Wheel of Wonder by Woody Allen and the British actor of Molly’s Game.
So between the despair of being scattered, the fear of dying, her sense of guilt for having involved him in the incident and the impenetrability of him, the two approach each other warming up each other in spite of the background of snowy peaks. Between the two there is a relationship of growing solidarity, trust and finally attraction that the director emphasizes through the gradual transition from the long plans to the close-ups on the characters that radiate the screen and support the narration. Too bad that Alex and Ben remain flat characters, lacking in that psychological depth that allows the viewer’s empathy. It is a pity that their dialogues remain only brief hints of a conversation that never comes. The scenes of the nights around the bonfire, in the icy caves or in the long walks under the snowflakes make you want another kind of talk between a man and a woman forced to put their lives in the hands of the other, a stranger.