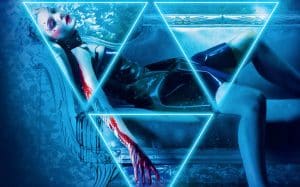 Jesse is a sixteen year old from Georgia who reaches Los Angeles groped for a modeling career. Her beauty and her innocence immediately make themselves noticed attracting the attention of much more surf colleagues (Gigi and Sarah) which make use of Ruby, a makeup artist that comes as a friend, to entice them into a game that she It will become more dangerous.
It sometimes happens that before directors who return regularly to address issues that matter to them most dear you are to wonder whether it would come time for them to change the registry. This is definitely not a reproach that we can turn to NWR (as now the director likes to present on the screen with graphics reminiscent of Yves Saint Laurent). Refn is the one who had built a reputation as a teller of harsh and violent stories that had as protagonists men whose existence was brought to confront a world in which the total redemption was impossible. We find now intent on experiencing the horror road looking for, as he says, to film a “horror without horror.” As well as claims to have always been attracted to the idea of ​​making a film about beauty.
The problem stems from the fact that now the movie turned me but was so charmed by the end (novello Narciso) with drown inside. Because the aesthetics of video installation that permeates nearly every frame from the first prevents him from noticing that he’s just assembling mode of look that others had previously worked with very different thickness and depth. Just to name names it is enough to quote Brian De Palma and David Lynch as a recurring visual cues. But what bothers most is not so much the search for an aestheticism and symbolism often end in itself but rather the misogyny that underlies the entire evolution of the story that (should be emphasized) Refn has shot chronologically, so allowing himself the opportunity to make daily changes to the script. Therein lies the possibility of salvation for Mary Laws and Polly Stenham who have written the script with him. Why else would remain the question of how two women were able to conceive a story so deeply innervated by a disaffection so deep against members of the same sex.
If the men of the first films were not seen to grant the possibility of redemption, here we are faced with a negativity without any complexity so that the witch in Snow White, who asked the mirror who was the fairest of them all, would, against Ruby, Gigi and Sarah, the figure of the amateur naive. The same Jesse ends up being attracted by a world that NWR describes as demonic but offered him (you read about it the credits) the broadest cooperation. Mysteries of marketing.