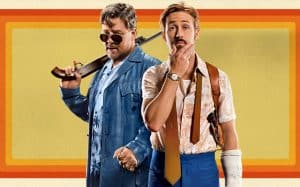 Los Angeles, 1977. For some time in the City of Angels pulls a bad air, choking pollution birds and crime kills the stars (read). To investigate we think Jackson Healy and Holland March, the first admonishes the people with his fists, the second the tracks for third parties. Investigators clumsy, Holland and Jackson ‘encounter’ case around Amelia, a young porn actress on the run from assassins that three days before they killed her boyfriend, experimental filmmaker burnt with his house and its films, and Misty Mountains , friend and diva like that precipitated his car down the hill. Hired by the mother of Amelia, administrator of ‘executioner’ justice, our very soon discover that nothing is what it seems. Launched in pursuit of the villains, they are accompanied in spite of themselves with Holly, the brilliant daughter of Holland who has no intention of waiting for Dad at home.
Shane Black, who has the name of a pulp detective fiction, was one of the richest writers of the eighties. With Lethal Weapon (1 and 2) takes the case and renews the action movie alongside mismatched partners and forcing them to join forces in adversity. the undisputed ruler of the buddy movie, directed his first film in 2005 (Kiss Kiss Bang Bang), a nostalgic homage to the noir series B of the forties and fifties, and is now cult. Of that debut, The Nice Guys conserves the environment (Los Angeles) and messed up couple that combines wonderfully Russell Crowe and Ryan Gosling, catapulted into the middle of a complex and agitated by intrigue crimes, leaks, accidents, conspiracies palace. The first abundant abandons the role of the invincible warrior, succumbing to alcohol but pulling (always) well-placed punches, reversing opponents and existential showers because Crowe knows only heroic destinies. less heroic but equally energetic, Ryan Gosling keeps the epic head of the partner who breaks an arm, but covers them shoulders. If Detective Crowe’s role is to weight against which any attempt fringes of enemy attack, Gosling competes the lightness of ‘shape by crossing’. He crashed once, twice and three times, like the cartoon characters is immortal, through walls and windows, flies in the pool, ruined to the ground, sliding down the hill standing up and always repeating itself in that ‘forever’. Heroes of a different bill and different attitude, Healy and March are obliged to work together to vanquish the common enemy by uncovering (below) generally friends and supportive. But not so early because the contrast between the two produces comic energy, hilarious dialogue and a contagious reciprocity.
Film tandem action, The Nice Guys moves to the bottom of the seventies, those who started the horizontal growth of the city, accelerated by the interests of manufacturers and corruption of the key officials of the planning, which ended up devouring the agricultural ecosystem and the hills of Los Angeles. Between public and private interests, investigate the forgotten detective Shane Black, the last bastions of an expropriated landscape of green and cherished idea of ​​the city (and lost). If Kiss Kiss Bang Bang celebrated Raymond Chandler, through the intricate designs and titles of the chapters which followed titles of his famous novels and short stories, The Nice Guys can breathe the American author and lysergic atmospheres of a city that practically invented him . Cowboy sentimental and spirits that Campanian of their personal moral code, the nice guys act a polar muscle that lowers the suspense and turn up the volume of the music. Music that helps to bind choreographic stalking, fist fights, races and coup the théâtre, harmonizing the madness slapstick Gosling with a sense of epic entertainment Crowe, tailoring caleidoscopia with the color parade décor.