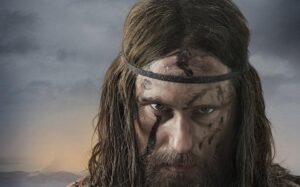 Hrafnsey, 10th century AD In a kingdom in Northern Europe, Amleth, son of King Aurvandil, witnesses the ambush in which his father dies at the hands of his brother Fjölnir. The usurper of the throne marries Gudrun, Amleth’s mother, while the boy manages to escape and save himself. Years later, Amleth has grown up: become a berserker, relentless and animalistic warrior, he knows only one purpose for his life: avenge his father, save his mother, kill his uncle.
For his third feature Robert Eggers draws on the medieval story of the Norman prince Hamlet, obsessed with revenge. A text first adapted by Saxo Grammaticus and then transfigured into tragedy by William Shakespeare, with the results we know well.
There is no trace of Rosencrantz and Guildenstern or of Horace and Ophelia therefore in The Northman, which focuses solely on Hamlet’s violent revenge, contextualizing it in a likely Viking kingdom, ruled by brutal traditions and awed by arcane powers. A gigantic fresco, with attention to every detail, in which Eggers questions himself – as in The Lighthouse – on the feral element inherent in masculinity and its rites of passage, and – as in The Vvitch – on the boundary between magic and earthly, a gray area in which subjective perception determines the truth of what is observed. The latter proves once again to be the director’s greatest strength, the ability to place an extraordinary visual taste at the service of virility competitions that mix machismo and homoerotic tendencies.
In The Northman there are two key moments of this genre: on the one hand the ritual of “dogs who want to become men” – led by a Willem Dafoe, cross between the jester Yorick and a shaman, increasingly obsessed and excessive – in which the awareness of the inner wolf – with a Pavlovian response based on burps or farting – is the only way to face a world governed by the law of the strongest, of spirit and / or of muscles. On the other, the competition in a sports tournament that looks like a cross between hockey and handball in which the violence of Rollerball or Florentine football transform the contest into a survival match.
Clearly detaching himself from the Shakespearean superstructure of the story and returning to the bone of the original story of Hamlet, Eggers outlines a totally amoral universe, where revenge is an obsession that is impossible to escape because it is linked to a paternal imprinting. Even in the face of an alternative truth to that in which he has always believed, it is not possible for Amleth to be reborn and reconsider: he is revenge. When King Aurvandil died, the spirit of a little boy also died, unable to become anything but an executioner.