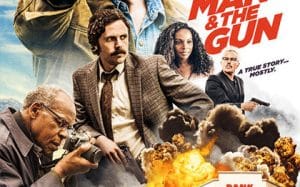 The Old Man & the Gun

Forrest Tucker is a bank robber that could be called serial. At 77 years and after 16 evasions, even from prisons like San Quintino, he has not stopped, together with two partners, to organize decisively original shots. Using his charm and calm, without ever using an arm, he continues to visit banks and get out with bags full of dollars. But there is a policeman who has decided to take care of him.
It could be a testamentary film written and directed by David Lowery. Also because every single sentence and every frame are written and designed for him, for the icon Robert Redford, who has come to a very tender age of 82 years.
It could be, but of course there is hope that it is not even if you have the impression and almost the certainty that Lowery knows in depth the filmography of his protagonist and that he does, from time to time, an affectionate review. The attentive spectator can not but think of the man whispering to the horses or to the electric horseman. just to mention two titles. If there were any who were to be amazed by the fact that Redford chose the role of a robber would do well to remember that The Sundance Kid by Butch Cassidy was one of the last great outlaws of the West.
Just as probably Tucker was the last gentleman robber in the history of crime made in the USA. The smile that does not get lost in the myriad of wrinkles that decorate Robert’s face is still the clean one of a man who has continued to love what he was doing: his job as an actor and Tucker to ‘live’.