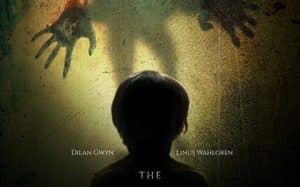 A cheerful family – made up of Fredrik, his new partner Shirin and Lukas, Fredrik’s son with his late wife – moves into a new house, a semi-detached house whose other adjacent half is uninhabited and somewhat in disarmament. The three are enthusiastic about the house, but soon the situation becomes complicated. Fredrik is often absent on business and Shirin notices that Lukas is talking to an unknown friend. Strange noises and strange behaviors convince Shirin that there is something wrong with the house. Her fears of hers are amplified when she learns that the previous owners’ little son has gone missing under mysterious circumstances. Fredrik doesn’t give much thought to Shirin’s fears, but he should.

There could be no more typical start to a horror (“inspired by real events”, as a caption warns us): an unsuspecting family unit enters a house that looks haunted or otherwise hides a horrible secret.

How many times have we seen such a start? Even the subsequent narrative developments do not deviate too much from tradition with the succession of strange events and with the attempt of the protagonist to tear the veil of mystery in a climate that becomes more and more difficult for her because the situation and the incredulity of the companion everything. rationality and little understanding make things more and more complicated. But if the story proceeds in a predictable way, the staging is valuable, refined and also elegant, aimed at creating a rarefied and macabre atmosphere. The hatching of the characters is overall successful: if the husband is a bit mannered (but still credible in her attitudes), Shirin is presented in depth in her complex psychological situation as a putative mother, but very present and dedicated. Even the figure of little Lukas has adequate prominence and the right character facet.

Where the film does best, however, is in the careful management of suspense and in the skilful use of expectations, silences and sudden jump scares, positioned with wise parsimony and remarkable effectiveness. There is perhaps an abuse of situations that are now all too familiar – such as when a character searches places with circumspection and behind him fast and ghostly figures sneak – but overall the tension is well sustained and sure in the results, even for the wise choice. not to dilute the story and keep the rhythm lively.

The solution to the mystery does not reserve any particular surprises, but is well represented thanks also to suitable special effects which, with more than a few aesthetic and sound references to the Japanese horror of a few years ago (from Ju-On the Grudge to Ring), create an atmosphere effective horror and also a discreet dramatic pathos in which the protagonist, played with considerable sensitivity by Dilan Gwyn, finds herself confronted with her own role and the nature of horror.

Appreciable debut on the big screen, after a rich television background, for Tord Danielsson and Oskar Mellander (also authors of the screenplay), who show remarkable skills in the management of the story.