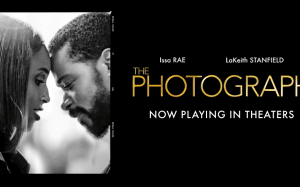 Two love stories – one from the past, one set in the present – are intertwined around the figure of the protagonist, Mae, at the center of both stories as the daughter of the couple of lovers who live the first and personally involved in the second , together with the photographer Michael, who enters his life bringing great upheaval. In fact, Mae is very attracted to him and soon falls in love with her but she is tormented by doubt: abandoning herself to this new feeling or immediately cutting off the nascent relationship in order to protect herself and not risk anything? In all of this, then, what would her mother have done for her and what did she actually do in her time, when she fell in love in turn?
Mae is a career woman who is electrocuted by the meeting with Michael, capable of conquering her in no time. But the woman is torn: is she ready to love and be loved or is it too risky?
Fourth directorial film for Stella Meghie, which launches into a less entertaining story than her latest work (the comedian The Weekend, in which the sentimental aspect is the excuse for a following of gags and misunderstandings) and which is in all and for all a real sentimental drama that, thanks to the temporal overlap of the story of Mae and her mother, also gains the shades of a historical novel without however deviating from its main nature of history that explores feelings in depth.
The cast sees in the two main roles Issa Rae and LaKeith Stanfield in the role – respectively – of Mae and Michael. Around them there is a predominantly African-American cast made up of several actors who have often appeared in films and TV series of great importance, even if perhaps with secondary roles, such as Courtney B. Vance or Rob Morgan, and characters at the first big career opportunity. , such as Jasmine Cephas Jones, Kelvin Harrison Jr, Teyona Parris or Lil Rey Howery. The cast closes Chelsea Peretti, wife of filmmaker Jordan Peele and comedian who became quite well known thanks to Brooklyn Ninety-Nine.