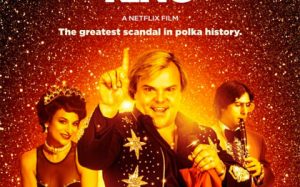 Jan Lewan is a colorful immigrant of Polish origin who, at the beginning of the 90s after various precarious and poorly paid jobs, meets the multi-instrumentalist Mickey and together form a band. Jan becomes the “King of the polka of Pennsylvania” while Mickey will be his clarinetist. Jan is then in love with his wife Marla, who as a child was a queen of Pennsylvania and now wants to repeat his triumph as an adult. Marla’s mother and Jan’s mother-in-law are part of the family, relentless in criticizing their son-in-law and skeptical about each of his projects.
A friend of mine producer sent me the documentary asking me if I wanted to play the character and I immediately said yes, because this guy is unleashed, and moreover he is unleashed at the rhythm of polka! Energetic, sweaty, he kisses the women of the public and then has that accent! It took me two minutes of the documentary to decide.
Jack Black
Jan especially has an elderly audience that loves him, to the point of being persuaded to invest in his bizarre projects, including a polka-related television show, and even sells trips that promise meetings with the pope. His is the typical “Ponzi scheme” for which he pretends to grow his investment and thus gets to rely on a new investment that allows him to maintain appearances, but it is a game where sooner or later the nodes are destined to come to comb .