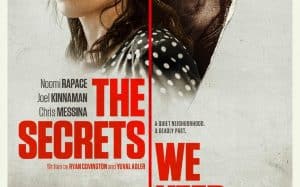 The Secrets We Keep

In a small American town in the late 1950s, Maja sees her serenity shatter at the simple sound of a whistle. Romanian who moved to the United States after meeting a doctor her betrothed in Greece during the war, Maja has never told the truth about herself. She is in fact a Roma who escaped a concentration camp in the last stages of the war, but her family was the victim of terrible violence in the flight. She thinks she recognizes her own executioner in the whistle of the time and, while the dormant nightmares resurface, she decides to get justice, also involving her husband – whose skepticism she must overcome.
The Secret is a thriller about the horrors of history and the summary justice of reprisals, which questions the very morality of America’s Greatest Generation.
The veterans of the Second World War, the last to have fought an undoubtedly just war, are the representatives of the best that this country has given to the world, but their perception of war is very different from the horror in which they have been plunged for years. European and Asian peoples. So can the hubby all home and family, caring doctor and kind father, really imagine what the Roma wife went through? And if he does manage to touch that pain, can he ever come out intact? Although the doctor is only the third of the three protagonists, it is his torment that is more stimulating, because the roles of the victim and the executioner have already been run in while he is the spectator of their theater, called to take the stage and take part in the tragedy.
Of course The Secret – The hidden truths plays on the ambiguity that the executioner is really such. The man who is captured by Maja and tied up in the cellar to confess continues to profess his innocence, says he is Swiss and does everything possible to convince the couple to let him go back to his wife. The latter is then the most victim of all, because she ignores the fate of her husband and finds herself having to live with a disappearance for her inexplicable. He has never told her anything about his past in the war and the more Maja tries to find information from her, the more she realizes that she is destroying her family.
There is a specularity between Maja and her alleged executioner: both have hidden their past from their spouse and have tried to immerse themselves in the serenity of Happy Days America. For this reason both the original title and the Italian subtitle are declined in the plural: both have a secret. Whatever the truth, Maja’s gestures trigger a dead end spiral, and keeping a man tied up in the basement as the police begin investigating becomes more dangerous by the hour. Thus the most typical mechanism of tension is triggered: the race against time. The mental challenge of making the alleged executioner fall into error therefore has an ever higher stakes, because it is no longer just Maja’s mental serenity, but also the survival of the entire family.