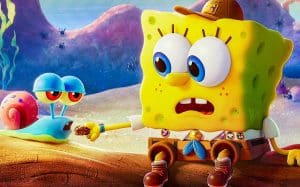 The Spongebob Movie- Sponge on the Run

The world’s most famous sea sponge returns to the cinema with its third film: Friends on the run tells of the crazy research that SpongeBob and the starfish Patrick, his usual shoulder, undertake to find Gary, the sea snail that has been there for a long time the pet of the Krusty Krab cook (the very first encounter between the two and the origin of their friendship is also told). Gary has in fact been kidnapped from SpongeBob’s house and his owner and his friends must find out who got stained with this fault, but their search will also lead them to deal with the lost city of Atlantic City, where SpongeBob and Patrick will even have to deal with gambling.