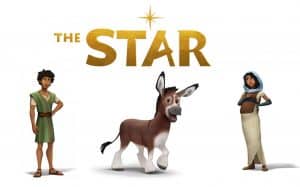 The donkey, Bo dreams of accomplishing something important, but it is forced to turn round the millstone, the miller’s bully. The dove, Dave, makes you follow the royal party that will go from Nazareth, and Bo is the way to get rid of. Chased by the miller, takes refuge in the home of a young bride, pregnant, Mary, who will welcome you with tenderness, in spite of the husband, a carpenter, Joseph, is contrary to take on the care of the donkey – as well as that of a child who has just discovered not to be his.
Yes, The heroes of Christmas tells the nativity story from the point of view of the animals that are found in the cave next to the baby jesus: the donkey, but also the ox, the sheep – headed by the rebellious Ruth, that to follow his way he abandoned the herd – and the three camels that carried on the back of the Magi.
It is an original perspective that lends itself to many funny gags, but also because the basic story we all know (at least all over the world to the christian tradition), and therefore the variations on the theme are understandable even to small children. There is a lot of irony in this re-reading of the birth of Jesus to the height of the animal gaze, and some interesting insight: for example, to show Mary as a teenager with the sleeves from the cuff to the middle of the glove, very assertive and not submissive to her husband. It will also be antistorico (the one who responds to the holy scriptures is the age of the Virgin mary), but it helps contemporary audiences to identify with in the story told. To scroll through the narrative are also the christmas music traditional, interspersed with original songs written and performed by Mariah Carey: after all, the original title of the film was The Star referred to the comet which leads the animals to the hut of the nativity, but also applicable to its composer, the vip.
The perplexity of Joseph focus on his inadequacy in not being ready to become “the father of a king”, in deference to the younger audience is incapable of grasping the dark side of the immaculate conception, and the messages are at least two: that it is not easy to understand what is really important, and when (or for what) is worth to behave like a hero, and human beings can reveal a nature much more ungrateful and dangerous animals, even those that at first glance can appear to be fierce. The fast assembly and a wink to all the animation simultaneously in CGI do the rest by making a cardboard box is not cosmetically flawless, but very pleasant in his effort to rejuvenate the ancient history of the world.