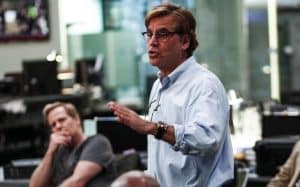 The Trial of the Chicago 7

The new film directed by Aaron Sorkin, already acclaimed Hollywood screenwriter who made his directorial debut in 2017 with Molly’s Game (watch the video review), tells of seven people tried because of what they did in the days when the congress was taking place National Democrats of Chicago in 1968, which went down in history for the popular revolts and for the very heated demonstrations that broke out at the same time as the event. Abbie Hoffman, Jerry Rubin, Bobby Seale, John Froines, Tom Hayden, Lee Weiner and David Dellinger are the seven protesters who are found accused of conspiracy against the American government following the Chicago events and the film describes what they have suffered in the days. of the court.