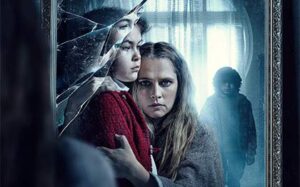 Rachel and Anthony suffered severe trauma with the loss of their son Nathan in a car accident. Together with Nathan’s twin Elliot, the couple leave the United States to relocate to Anthony’s old family home in his native Finland. The idea is to leave again in a distant place, forgetting the past. Sounds like a good idea at first. The house is large and charming, in the middle of the countryside. But things soon get complicated. Rachel feels alien to local customs and habits and is anxious and protective of Elliot, her only child left. What’s worse, though, is that Elliot starts acting weird and tells Mom that he’s not Elliot, he’s Nathan. Rachel finds herself in a nightmare and seeks help from an elderly local woman who seems to know a lot about her and talks to her about demons and possession.
The theme of the twin is recurrent and frequented in horror cinema: we have seen it treated several times, as for example in that little gem of rural horror – a genre to which this film also belongs – which is Who is the other? by Robert Mulligan. This is because the theme lends itself to ambiguity and displacement.
Here Taneli Mustonen (Lake Bodom) however focuses above all on the figure of the mother who, faced with the intense drama of the loss of a child, pours her agitation and her insecurity on the surviving twin of whom she always and obsessively wants to know where she is. and how he is. This sense of unease and uncertainty is further increased by the displacement that the woman feels in finding herself in an environment that is alien to her and that she perceives more and more as hostile, in her aspects of pagan and archaic rituals that seem dark and evil to her.
The story gradually piles up supernatural suggestions ranging from the typical ghostly manifestations to the strange legends that surround a mysterious sacrificial rock that would allow the fulfillment of desires, in a climate that is becoming more and more paranoid. Rachel’s isolation is painted with decisive and often successful traits, while at the same time highlighting how her husband is perfectly at ease in his home environment and suggesting a sort of connivance with the hostile and larvably demonic milieu that dominates the area, with a clear reference to the situation experienced by the protagonist of Rosemary’s Baby.
The reflection on pagan religiosity is also evident, in the wake of classics like The Wicker Man or more recent films like Midsommar, but what prevails is a climate of indeterminacy, always suspended between nightmare and reality, with the film finding some moments visually evocative precisely in some dream sequences well conceived and realized. The almost pictorial use of the suggestive Finnish countryside is also of good effect.