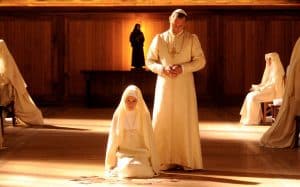 The story of Lenny Belardo, who became Pope with the name Pius XIII, first American pope in history. His election seems useful to start an effective media strategy. But it is not so easy to bend, nor to the will of the Curia nor anyone trying to manipulate it.
The first two episodes of the series (which includes ten) already offer the opportunity to reflect on the complex work that is looming, if you will keep the promises, but there is no reason to doubt it, as one of the leaders of sorrentiniana filmography. First, because the wide extent of writing that allows mass production causes screenwriter Sorrentino seems to have found the ideal space in which to unfold his visionary but also the almost inexhaustible wealth of opportunities for reflection that the duration of a film, no matter how large, It does not allow. As if to contradict what I have just written (but the sense of productive contradiction is at the center of Lenny / Pius XIII behavior), the material that is developed is synthesized so as to Sorrentino: “The clear signs of God’s existence. The obvious signs of ‘absence of God. as you search for the faith and how to lose faith. the magnitude of Holiness, so great to feel it intolerable “.
It is obviously a secular eyes what is being proposed but deeply steeped in knowledge both in theological and on the internal dynamics of the curia. Moretti If we had proposed a pope who felt as too heavy weight conferred the engagement, Sorrentino there proposes one that, as it suggests the first frame (thanks to an increasingly intense Luca Bigazzi), trying to emerge from a ‘ childhood that still marks it deeply enough to push him to identify the nun who received him in the past that hold true substitute mother figure. The Holy Father still an absolute need for himself a father with both initial (capital letter, in heaven and on earth tiny). His humor, his apparent determination, his attitude, at times disdainful and sometimes ready to listen, have a thought behind them: “God is like a man: does not change.” Phrase that can be interpreted both on a cosmic pessimism and on that of a certainty, a cornerstone on which to build an idea of ​​the Church.
Sorrentino, like his papa interpreted with great grip by Jude Law, is very able in the crowd when the viewer seems to push forward the anti-clerical satire retreating But at the right time to suggest the possibility (never of course the certainty) of a ‘beyond’ going beyond the intrigue and the paucity of men who would be God. After Pius XIII is not so far from those who created it: they both love the ritual because it offers them countless upheaval conceptually for Sorrentino, even when he thinks the so-called small screen, is always Cinema.