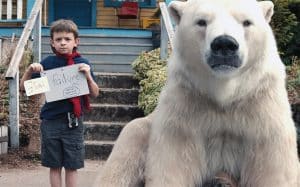 Timmy Failure- Mistakes Were Made

11-year-old Timmy Frana is the head of an investigation agency whose only other member is his close friend Super, a 700-pound polar bear. The two move through the streets of Portland, trying to solve the mystery of a missing backpack and a dead hamster; questioning the same age Molly Petula; offering false promises to the generous Rollo and trying in every way to anticipate the moves of Corrina, the classmate who cannot be named, an evil rival spy in league with “the Russians”.
It is no coincidence that the protagonist’s tender and clumsy imaginary friend appears on the day his father decides to leave home, leaving him alone with an understanding mother but crushed by the responsibility of having to earn money for the rent.
The super white bear (Total in the original version, to complete the eloquent expression “Total Failure”) is at the same time his lifeline from solitude and the sounding board of his ego. And so is his office, among his mother’s clothes: the portal for his fantasy world, the comfort zone where Timmy is no longer an eleven year old who just doesn’t want to study, but a detective who works for the benefit of the whole school and neighborhood community.
What then the real mystery that the boy has to solve does not concern, in reality, neither a girl secretly envied nor a dead hamster, but rather his place in the world, lost as it is between the aspiration to singularity and the comfort of normality, it is something inherent in the genre to which the film belongs, the brand belonging to that universe of reference, and it is more than good that the director knows how to keep it under text, allowing us to be in all respects with Timmy and his level of awareness.
On the other hand, behind the adaptation for the screen of the adventures of the character invented by Stephan Pastis (whose books are published in Italy by Sperling & Kupfer), there is no ordinary hand, but that of an expert screenwriter such as Tom McCarthy (“Up”). To him and Pastis, it is evident that ideas are not lacking, so much so that the only thing on which one can object is the ending, which does not resist the temptation of rhetoric, yet the strength of Timmy Frana is above all in his visual layout and in the the way the city of Portland serves the film and vice versa.