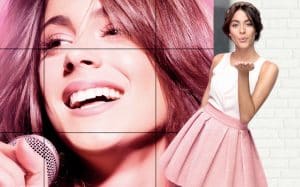 Violetta finds himself at a crossroads in his life: his personal life interfere with his career and so the young artist decided to take some time off to find herself. Disappointed by love and with a strange dream that can not be forgotten, is forced by his father to spend the summer in a small Italian island, under the guidance of the glamorous and mysterious Isabella, played by the great Angela Molina. Here, in a kind of factory, Violetta find himself inspiration thanks to new friends and a highly stimulating atmosphere.
Martina Stoessel returns to interpret the darling of the younger, opening a new chapter in which the singer embarks on a path of growth and discovery of that part of himself that binds to its past: Tini. Presented by Walt Disney Pictures and aimed at an audience of mostly young girls, the film moves on the predictability of the line, sometimes too trivial, but try to paint the picture of an artist who does not put aside the feelings and farming with what dedication for which it was born: to sing.
But there are too many clichés and figures macchiettistiche almost like a little Italian ‘scoundrel and womanizer or loser shy and awkward, but what it points to a movie like Tini – The new Violetta’s life has certainly put the artistic highlight of protagonist. The journey that makes Violetta is not only the experience of the girl on the other side of the world, his is an inner journey that reconciles with the past and prepares for a new and different future, as there are different tests that will face . First of all, his relationship with Leon (Jorge Blanco), then what most concerns the inspiration and artistic production. Violetta will have to understand what really wants to find herself and especially to continue to shine his star.
The film is full of songs and choreography, a real musical comedy that never fails to romance and many found ironic and comic, of all the character of Ludmilla (Mercedes Lambre). Violetta confronts a training program from which will come out more mature and adult, and although the action takes intersections too packed script, Tini- The new Violetta’s life is certainly a product that will satisfy the fans of the Argentine starlet unleashed.