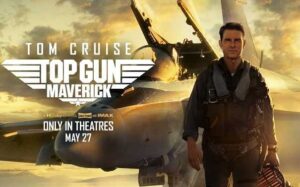 At sixty, Pete “Maverick” Mitchell is still a ‘mere’ officer in the service of the US Air Force. He had everything to become a general but Mav doesn’t give a damn about the stars and the uniform, he prefers to be a test pilot and surpass himself with Mach’s blows. Retreating in a hangar, amid glorious memories and ‘repairs’, he is called back by his superiors to train a fleet that will face a high-risk mission in enemy territory: the dismantling of a secret uranium base. Among the young students is Bradley Bradshaw, son of Goose, friend and co-pilot, who accidentally died the first few years during an exercise. Their relationship struggles to take off as the demons thunder like an F-14 and the mission looms. The military and the formative one.
Thirty-six years later, Maverick resumes service in a film that pays homage to the 1980s and its performers. Nostalgia operation already traveled by Indiana Jones and the latest Star Wars trilogy, but with Top Gun it’s a whole other story. Joseph Kosinski’s blockbuster does not stay on the ground and flies very high.
Top Gun: Maverick is a sequel in full health and full of myth. The same virile friendships, the same rivalry to pilot powerful fighters, the same homoerotic tension behind the Ray-Bans, the same beach and of course the same opening credits, which take up Tony Scott’s incipit on the famous theme by Harold Faltermeyer. A long first scene, evocative and dreamlike, which suddenly plunges us into 1986 and onto an aircraft carrier in feverish activity. Time has not passed, Top Gun is before us, intact and ready to try the impossible alongside its hero: to contradict all expectations and reject everything that should have been, or that the industry would have wanted it to be. One last melancholy flight.
The idea of ​​the transmission is central but the hero of this second chapter is still him, Tom Cruise, who runs in motion in the same sunset but now wonders how long he can ‘fly’, when and where to stop. Comparing his character with his past gives Maverick the depth he lacked in the original, where he resided in the raw archetype. Above all, he leads the film towards an almost Fordian emotional altitude. Like the poignant reunion of Tom Cruise with Val Kilmer, who accounts for the eternal youth of the star and the inherent drama of him: to see time, life and death flow over others. But not on him, that that insatiable search for youth carries her as a burden, or perhaps a destiny.
Beyond the ‘military’ plot, the classic tale of overcoming and forgiveness, Top Gun: Maverick is above all a new meditation on Tom Cruise and his relationship with the passing of time. Impossible for him to let go. He says it and repeats it in a film that plays a lot (perhaps everything) on ​​his age and on a form of maladjustment to the contemporary world, comparing him with the role that made him famous and or defined him.